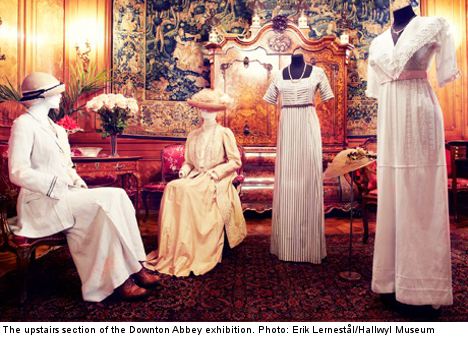 “So we responded by extending our opening hours on the weekends.”

And the glamour of the smash hit television series seems to have rubbed off on the museum’s total visitor tally.

“We saw an increase of 12 percent since last year, which had also been a good year for visitors,” museum director Heli Haapasalo said in a statement.

Beatrice Posner was one visitor to the show. “You really got a feeling for what it was like to be alive during that time,” she told The Local.

“I really enjoyed all of Lady Mary’s dresses, they were beautiful and very appealing.”

Another visitor told The Local on Twitter that the dresses were minuscule.

“The actors must have be very small to get into them.”

The museum, which was once the residence of the well-to-do von Halwyll family, has now extended the exhibition until January 20th, 2013.

Originally, the curators decided to bring the exhibition “Costumes of Downton” to Sweden because many of the museum’s regular visitors told them how the apartments reminded them of the life of the Crawley family and their servants in the series.

“The museum’s history is reminiscent of the series Downton Abbey,” noted museum representative Samuel Norrby as they announced the show.

The Edwardian clothes have been selected from the first season of the show.

Hallwyl Museum spokesperson Margareta Berglund, who in particular loves one of Lady Mary’s gown in the exhibition, says she is fond of the entire presentation.

“The clothes are shown in the different rooms of the apartment. It’s like they’re here visiting,” Berglund told The Local.

“It’s almost as though they’re sitting there in the drawing room chatting to one another.”

The show also includes the servants’ outfits. It also mixes in some items from the museum’s own clothes collection in order for visitors to learn about similarities and differences between English and Swedish upper class families in the early 1900s.

“I think the show is such a hit because it illustrates the divide between the rich and the poor,” visitor Beatrice Posner told The Local.