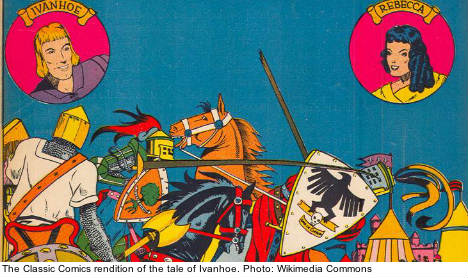 Despite many an aching head and probably a few sore tummies after the revelry of New Year’s Eve, many Swedes settle in for the annual January 1st treat – the 1982 filmatisation of Ivanhoe, the tale of a knight who returns to England from the crusades.

Yet neither the fierce jousting nor the Norman political intrigue has the attention of the Swedes. Instead they focus on the love battle between the doe-eyed Lady Rowena and the fiercely independent Jewish healer Rebecca.

Even the cultural pages of the daily Dagens Nyheter dedicated several column inches to the unsatisfying ending originally penned by Sir Walter Scott:

Every year the Swedes have to see Ivanhoe choose Rowena, played by Lysette Anthony, over Olivia Hussey’s Rebecca despite the clear sexual frisson between the Christian knight and the Jewish beauty.

Yet whether inter-religious relationships are less taboo nowadays means little to the hordes of irritated Swedes who are still stuck with the film’s ending on screen.

“Should one start the year with being irritated at Ivanhoe picking the wrong girl?” tweeted Malin Grundström, one of the many Swedes who joined the grumbling online.

In the 1952 version of the film, Elizabeth Taylor played Rebecca while Joan Fontaine took on the role of her romantic foe Rowena.

A quick scan of Twitter, with one hour to go before broadcast, reveals that no one is on Rowena’s side in the love-triangle drama. Or at least they don’t admit to it in public.

Editorial writer and youth writing coach Dilsa Demirbag-Sten on the other hand seemed to think that Anthony Andrews’ Ivanhoe actually does Rebecca a favour.

“Rebecca should thank her lucky star that she didn’t end up spending the rest of her life with that sleeping pill of a man,” Demirbag-Sten tweeted.