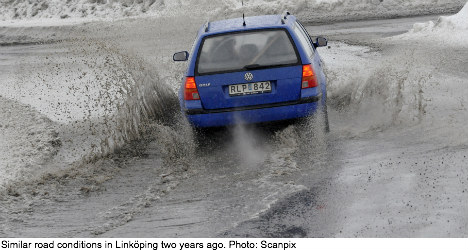 Trains going between the towns of Uddevalla and Borås have been cut off by water inundating the tracks in part, forcing passengers to take replacements buses.

It will be more than 24 hours before the flooding has receded enough to resume normal train traffic, local radio reported.

The rain and the melting snow has also lead to some flooding of residential properties, with water seeping into the basements.

Emergency services have lent out water pumps to worried house owners in some areas, reported the TT news agency.

The basement of the hospital in Falköping was also in part flooded.

The area most affected lies just west of Lake Vänern, with some reports of flooded roads.

Motorists may encounter difficulties between Olsfors and Sandared near Borås, as well as between Uddevalla and Färgelanda.

The Swedish Transport Administration (Trafikverket) offers up-to-date information on road conditions on their website (link below).