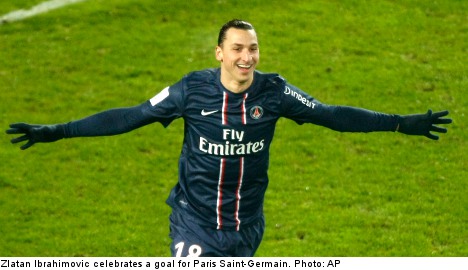 “Paris is a club in major transition,” the 31-year-old former AC and Inter Milan striker said in the Qatari capital Doha, where the club is training during the French league’s winter break.

“We have some fantastic players but this project only began a year-and-a-half ago and I have only been here six months but I have seen things advance very, very quickly.”

Ibrahimovic is currently the top scorer in Ligue 1 with 18 goals and said he and his team-mates were working hard every day to improve to the standard of Europe’s biggest clubs.

He added that he had “aged 10 years” since arriving at the Parc des Princes from the San Siro six months ago, given the massive scrutiny of big-spending PSG, which is owned by Qatari investors, and interest in his performances.

“For me, everything has been positive but in the end everything depends on the results. If we win, everything will be better,” he added.

Carlo Ancelotti’s team go into the second half of the season joint top with Lyon and Marseille and also have a Champions League last 16 encounter with Spanish side Valencia to look forward to on February 12.

Ibrahimovic accepted that a move to PSG, whose reputation has not been matched by silverware in recent years, may have been seen as a surprise but he said the transfer was all geared towards helping the club develop.

“I knew when I came here, it would be a big thing for the media because to come to Paris was not necessarily expected for a player at the peak of his career,” he added.

“If you look at the project, the people behind the club and the players who have come here, the situation is different.

“There are clubs like Paris or Manchester City who want to become big clubs and the best players will not necessarily decide to join a club based on their history, it will also come down to a new project and new excitement.”

“For the rest of the season, we have to concentrate on all competitions, even the French Cup. We are training every day to achieve our goals and we want to win everything.