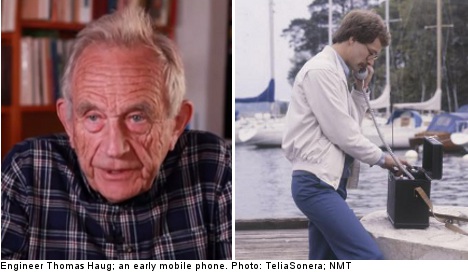 Thomas Haug, 85, will be the first Swede to receive the Draper Prize, sometimes referred to as the “Nobel Prize of technology” and awarded annually by the American National Academy of Engineering.

He will share the award, which carries a sum of $500,000, with Joel Engel, Richard Frenkiel, and Yoshihisa Okumura for their efforts in the development of mobile telephony.

Haug is being recognized as one of the pioneers who helped develop the world’s first mobile telephony standard, Nordic Mobile Telephony (NMT), in the 1970s, prior to its launch back in 1981.

“I’m very honoured to be a prize recipient since we were several persons involved from the operator as well as manufacturer side in developing the first mobile systems which few realized the full potential of at the time,” Haug said in a statement.

According to Haug, NMT “is the template for today’s mobile communication enabling people to communicate and access information almost everywhere and anytime”.

The standard was initially developed to make communication easier between the Nordic countries by allowing mobile devices to connect people in the large, but sparsely populated north.

Haug, who worked as an engineer Sweden’s Televerket (now TeliaSonera), helped convince his superiors to push ahead with the development of NMT, and later chaired the joint European standardization group which developed the Global System for Mobile Communications (GSM).

He led the GSM project until 1992, at which point GSM telephony was ready to be introduced on a large scale worldwide.

During last year’s 30th anniversary of the launch of NMT, Haug was referred to as the “conductor” who “successfully encouraged Europe’s mobile-phone orchestra to play in harmony” to develop GSM, the precursor to today’s 3G and 4G standards.

“Considering Sweden’s world premiere launches of the mobile networks NMT, the mother of it all, and later on 4G, it is very pleasing the prestigious Draper Prize will be awarded a Swede the very first time the development of mobile technology is recognized,” professor Bertil Thorngren, former head of the Center for Information and Communications Research at the Stockholm School of Economics, said in a statement.

Past winners of the Draper Prize, awarded to “recognize innovative engineering achievements” that have “led to important benefits and significant improvement in the well-being and freedom of humanity” include Vinton G. Cerf for the development of internet, as well as Sir Timothy Berners-Lee, considered the founder of world wide web.

The prize is named after American engineer Charles Stark Draper, who helped designed and built the computers that made the Apollo moon landings possible.

Haug will receive the prize at a ceremony scheduled for February 19th in Washington, DC in conjunction with National Engineers Week.