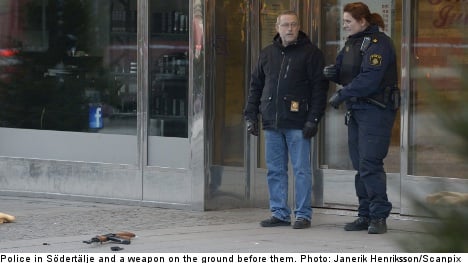 “We know that one of the robbers has been shot,” Albin Näverberg at Södertälje police told the Aftonbladet newspaper.

Speaking later with TV4, an officer leading the operation explained that the robber had been shot in the head.

He has since been taken to hospital, but the extent of his injuries remains unclear.

Police received a call around 11.30am on Friday about an armed robbery at a jewellery store.

Police confirm that they engaged in a shoot-out with four masked robbers.

“We were first told that three of them had gone into the store while a fourth stayed in the vehicle,” said Sven-Erik Olsson, spokesman at Stockholm County police headquarters.

“Shots were exchanged between police and the perpetrators.”

Olsson said police didn’t know whether the robbers made off with any jewellery.

A witness told the TT news agency that the incident left bystanders shocked and in tears.

“I was on the escalator, about ten or 15 meters away and heard people screaming. The crashed through the display and started taking things,” the witness said.

“It was so brutal. People were terrified.”

No one else was injured in the incident and police have deployed a helicopter in their search for the perpetrators, who reportedly escaped in a silver Audi.

“It’s a serious crime. We’re putting a lot of resources into it,” he told TT.

Later on Friday afternoon, police located the first getaway vehicle, explaining that the robbers likely switched to another car.