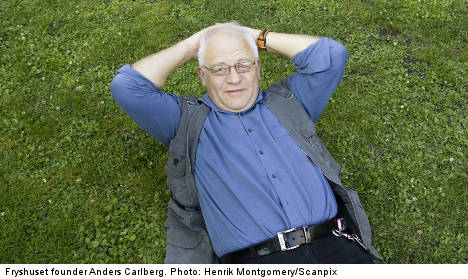 Anders Carlberg founded the Fryshuset youth centre in 1984 with the help of the YMCA in Stockholm.

Fryshuset started out as a place for young people to play music and sports but soon became a haven for troubled youth, with Carlberg an outspoken and sometimes controversial figure in the debate about youth work.

In the summer of 1986 when riots broke out between teenage groups in Stockholm, the Swedish government asked Fryshuset to step in.

Fryshuset launched a national campaign, touring the country to give lectures on non-violence.

But Carlberg also stirred up a great deal of controversy in the late 1980s when Fryshuset allowed Sthlm Skins, a group of young neo-Nazi skinheads, to use part of its premises.

This was at a time when right-wing extremist groups were on the rise in Sweden and young skinheads used to gather in the Old Town of Stockholm.

Shop owners complained that they youths were scaring off tourists and Carlberg allowed them to gather at Fryshuset.

Two years later one skinhead burnt down the premises and Sthlm Skins were allowed to move into Fryshuset’s main building.

Several of the skinheads who hung out at Fryshuset were involved in violent incidents, including assaulting a janitor at the Aftonbladet newspaper.

In 1996 Fryshuset closed down its skinhead project after widespread criticism from politicians and the media.

As a student, Carlberg was active in left-wing politics, chairing the Swedish Leftist Youth (Vänsterns ungdomsförbund) between 1967 and 1970. He also played a prominent part in the 1968 student occupation of Stockholm University.

In 1970, he co-founded, the Communist League (Förbundet Kommunist) and in 1982 he joined the Social Democrat party, which he has represented on the Stockholm City Council, School Board and Police Board.

In 2007, he received the Swedish Salvation Army’s Hanna Prize and in 2010 the medal of the Swedish Patriotic Society for important achievements in the education of youth.

Fryshuset, meaning cold storage, was originally located in an old storage house but later transferred to a 24,000 square metre building in south Stockholm. Today, it is Europe’s largest youth centre.

“We at Fryshuset who had the privilege to be close to Anders are mourning a large person, a friend of many, an inspirer, role model, colleague and leader,” a statement on Fryshuset’s website said on Saturday.

Carlberg died Saturday morning surrounded by his family. He is survived by his wife, two children and three grandchildren.