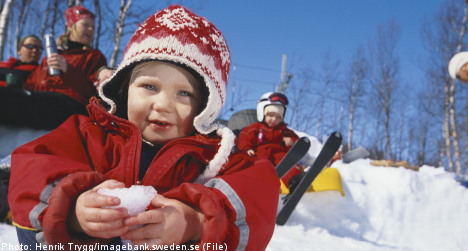 Researchers Inga Wernersson and Ingrid Granbom reviewed efforts to include men in the traditionally woman-dominated field.

They looked at different policies to include more men at different levels of teaching since the 1960s. There were efforts in the 60s and 70s to increase their representation in teacher training, but the efforts did not address the imbalance at preschool level.

Swedish children have the right to state-financed preschools from the age of one until they start school at age seven.

Umeå is currently the best at enticing men to preschool teacher training. At Umeå Univeristy they make up 21 percent of the course, and there are also many men working in the northern city’s preschools.

Northern Sweden did better overall in the statistics and, in general, the cities had more male preschool teachers than the national average.

In the report, researchers note that individual school principals are the key to whether the preschools prioritize a more gender-equal workplace.

The report, commissioned by the National Agency for Education (Skolverket), looks in detail at a Norwegian campaign on state level since 2001 that aims to introduce more men to the profession.

The National Agency for Education has now asked the government to look into a similar drive, although the report recommended awareness-raising and national coordination in any future effort.

The preschools in Norway were asked to publicize their work as much as possible. The Swedish report authors note that a positive attitude from the Norwegian media helped the project along.

Scotland has also seen some successes in their work to include men in the traditionally woman-dominated field but its neighbour, England, has failed to a large extent in a similar drive.

The researchers said that citizens in both Scotland and Norway were positive to such efforts, while the English could be seen as more sceptical.

”In Norway, people in general know a lot about inequality and people often welcome equality initiatives in a way we don’t see in England,” the researchers noted.

Several of the countries saw a correlation between the state of the economy at large and the clout of their projects.

Similar labour market factors may have underpinned Norway’s success. The researchers noted that the start of the programme coincided with relatively high unemployment.