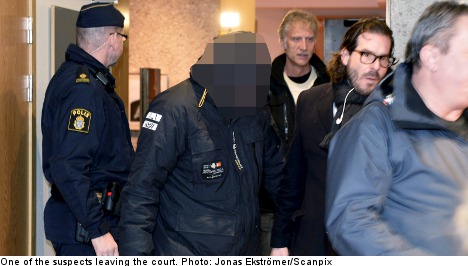 The shooting victim is in a critical condition at the Karolinska Hospital after being shot in the head while trying to escape from police during a jewellery heist in Södertälje, an hour south of Stockholm.

He was ordered held on remand in his absence while police finish their investigation and the prosecutor decides whether to press formal charges.

Another two male accomplices and two women were also ordered held on remand.

One of the suspects, however, claims to have a water-tight alibi.

“Without going into detail, I can say that he has a proper alibi,” Slobodan Jovicic, the lawyer of the 22-year-old, suspect told the TT news agency.

“No one has even bothered to check it.”

The two women, aged 21 and 22, are suspected of complicity in aggravated robbery.

Serpil Güngör, the lawyer of the injured 26-year-old, refused to comment to media on the remand order other than to say that the decision would be appealed.

Meanwhile, prosecutor Kay Engfeldt will look into whether the police are guilty of any crimes in connection with the shooting, but pointed out that when perpetrators are armed it is justifiable for police to shoot.