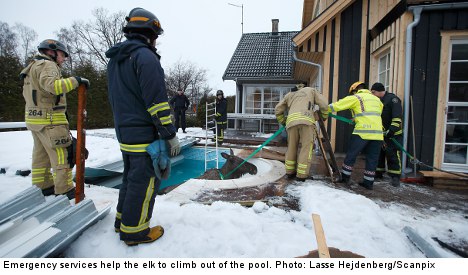 “The elk must have jumped over the fence looking for fallen fruit,” Linköping municipal wildlife worker Hans Johansson told The Local.

“But when she tried to walk over the pool’s cover, she fell straight through.”

The elk’s unplanned plunge through the cover was no surprise for Johansson, who estimated the massive beast to be about six years old and around 600 kilogrammes.

Johansson had been called to the scene to provide advice on whether the elk might need to be put down due to any injuries sustained during the ordeal.

RELATED PHOTO GALLERY: Click here for more images of the elk in the pool

However, after a tug of war battle with seven workers from Linköping’s emergency services, the elk managed to escape uninjured, though no doubt a little shaken.

“She was so scared when she finally got out that she just ran away,” Johansson said.

“She still had the emergency rope around her neck, but I’m sure it will be fine.”

At one point during the struggle, in which the emergency team even used ladders for leverage, the elk somehow managed to fall back into the pool.

When the elk was finally out of the pool for good, her slippery ice-escape left onlookers bemused – including Johansson.

“This is not something I see very often,” he told The Local with a laugh.