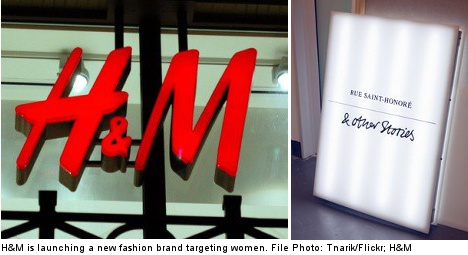 “The new fashion brand ‘& Other Stories’ will offer women a wide range of shoes, bags, accessories, beauty and ready-to-wear” garments, the company said in a statement.

“During spring ‘& Other Stories’ is launching its first stores in Barcelona, Berlin, Copenhagen, London, Milan, Paris and Stockholm,” it said.

The brand will also be available in online stores in Belgium, Denmark, Finland, France, Germany, Italy, the Netherlands, Spain, Sweden and Britain.

H&M was overtaken in 2011 as the world’s biggest fashion retailer by Spanish rival Inditex, the owner of Zara, which has been quicker to expand into emerging markets.

Another reason for the Spanish group’s success has been its larger portfolio of brands, which includes the upmarket Massimo Dutti and the Zara home furnishing chains.

Unlike Inditex, H&M until six years ago only had its own brand, which is heavily reliant on young customers whose spending has been hit by the economic crisis.

Since then the Stockholm-based company has tried to broaden its customer base by launching brands such as COS (Collection of Style) and Monki that target a slightly older, more affluent audience.

“In the creative ateliers in Paris and Stockholm diversified fashion collections are designed with great attention to detail and quality at an affordable price,” it said.