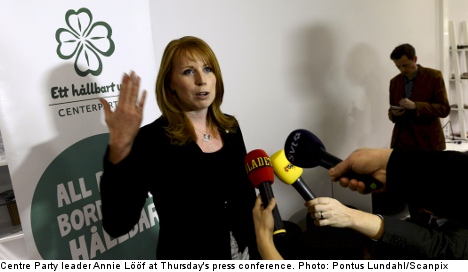 “She showed poor political acumen by not managing to foresee the storm the platform would create,” political scientist and social democrat Ulf Bjereld told the TT news agency.

Lööf was forced to cut short her holiday in Thailand on Wednesday in order to return to Sweden to deal with an ongoing crisis stemming from opposition to the Centre Party’s new platform, set to be presented at the party’s conference on February 5th.

After arriving in Sweden on Thursday, she held a telephone conference call with dozens of party members, and despite reiterating her desire to jettison proposals legalizing polygamy and inheritance rights, Lööf was unable to sway all of her disgruntled colleagues.

“The sections about a smaller state must be removed and the programme must be rewritten from the ground up.”

Speaking with Sveriges Radio (SR) after the conference call, Lööf said she welcomed the ongoing debate about the party’s proposals.

“When I started as party leader, I said the Centre Party’s ideas should drive the debate in Sweden. I think it’s good that the debate has been so lively,” she said.

Lööf promised that she and the party executive board would put forward a revised proposal that is “purified of what’s in there now”, emphasizing the importance of classic Centre Party principals such as the environment, decentralization, and social responsibility.

“We’re going to listen to our inner Centre Party soul and correct some parts and add other things,” she told reporters.

Among the Lööf’s Centre Party critics is foreign policy spokeswoman Kerstin Lundgren who slammed the party platform in an opinion piece published in the Dagens Nyheter (DN) on Thursday as being infused with principals that would lead to a social Darwinist society.

Lööf also came under fire for claims she had never supported polygamy after it emerged she had come out in support of it in 2006 as vice chair of the Centre Party youth wing.

“I don’t think the state and laws should determine who and with whom my neighbours or I want to live,” she wrote in a blog post at the time, according to SR.

“If my neighbour wants to marry two men, I wouldn’t move or care. That’s his or her choice.”

Speaking with Sveriges Television (SVT) on Thursday, Lööf said she had expressed herself clumsily when claiming she had never supported polygamy, explaining the blog post “was written ages ago”.

“It’s especially unfortunate that Annie Lööf publicly denied having earlier been a supporter of polygamy…By twisting the truth, she strengthened the image that she is an unclear politician and her personal credibility has been undermined,” he told TT.

K-G Bergström, political commentator for the Expressen newspaper, said Lööf’s decision to cut her holiday short showed she “didn’t have things under control”.