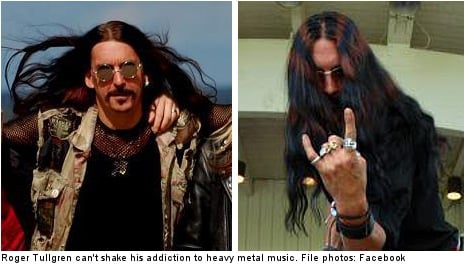 “I’m still very addicted,” Roger Tullgren, 47, told The Local this week from his home in Hässleholm in southern Sweden.

“I listen to heavy metal music 24 hours a day.”

Tullgren, whose heavy metal interest stems from hearing a Black Sabbath album back in 1971, first gained notoriety in 2007 when it emerged he had managed to have his undying affection for metal classified as a disability.

The diagnosis, backed by an assessment from occupational psychologists, allowed him to receive benefits to supplement his income, as his need to listen to heavy metal made it hard for him to hold down a full-time job.

“I have been trying for ten years to get this classified as a handicap,” Tullgren told The Local at the time.

“I spoke to three psychologists and they finally agreed that I needed this to avoid being discriminated against.”

As a result, the heavy metal addict, who sports a lengthy mane of jet-black hair, started receiving monthly payments of “a few thousand kronor” (1,000 kronor = $155) to supplement his income as a part-time dish washer.

Tullgren’s remarkable story once again struck a chord with the international media last month, with articles popping up in the Huffington Post and on the website of the New Musical Express (NME), a well-known British music publication.

“I’m not really sure why the story popped up again, but I’ve had a lot of people emailing me about it from all over the world.”

He explained, however, that he hasn’t been receiving benefits since January 2012.

“I took a new job as a janitor. I work four hours a day and then spend most of the rest of my time with my band, Papa Midnite,” he said.

Tullgren and his band mates have been in the studio in recent months working on a new album, and he is thankful that he’s managed to find different ways to weave his love of metal into his life.

“Metal controls my life. I need to have my music with me wherever I go,” he said, explaining that he even plays heavy metal at night.

“I’m taking medication that makes it hard to sleep, which leaves me with even more time to listen to metal,” he said.

And while there may not be any scientific research into the possible genetic roots of heavy metal addiction, Tullgren explains that his four-year-old daughter already shown signs of having inherited her father’s condition.

“She’s wicked on the drums and synth,” he said.

Despite his addiction, Tullgren has never sought treatment to bring his obsession with metal under control and says he doesn’t plan to do so.

“Some friends suggested I sit in a room for twelve hours straight and listen to nothing but dance music, but I didn’t do it and I’m glad for that,” he said with a laugh.