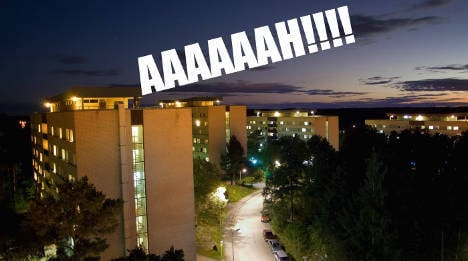 Every night at 10pm Swedish students open their windows and scream for several minutes but nobody knows for sure how the phenomenon started.

Have you ever felt so stressed out or anxious that you just want to open your window and scream at the top of your lungs?

Well, students in Flogsta, a residential area in the Swedish university town of Uppsala, do just that when the exam pressure gets too overwhelming.

No one knows exactly how the Flogsta roar, or Flogstavrålet in Swedish, started, but every night at around 10pm students take to their balconies, roofs and windows to scream out their anxiety.

And the phenomenon has spread to other university towns and campuses, too, such as Lund, Linköping and Stockholm.

Reddit user Lavil recently posted a video on LiveLeak from Lappkärrsberget, a student residence area in Stockholm, in which he sets off a haunting, wolf-like round of roaring that lasts for two minutes.

The shouty Swedish student tradition is now the stuff of urban legends.

Some say it started as a way of honouring an Uppsala student who committed suicide in the 1970s, the same decade that the Flogsta student campus was built.

According to another theory it was an angst-ridden exchange student who started it all by howling every night at midnight in the 1970s until he was told that, in Sweden, there is rule which says you can't make noise after 10pm. So the exchange student started screaming just before 10 instead.

Others claim that the screaming started spontaneously and is simply a way of collectively relieving exam stress and settling the nerves.

The tradition died down for a while but was revived with the help of two student radio DJs in 2006. They got around 1,000 students in Flogsta to attempt to break the world record in howling.

The students howled for eight minutes and reached a sound level of 106.3dB. But it was not enough to beat the world record at the time, which was achieved at Wembley in a collective howling session that reached around 128dB.

The DJs admitted that they did not know how the tradition emerged, but a couple of years later a blogger who goes by the name of Janne claimed that he was, in fact, among those who started it all as a physics student living in Flogsta in the late 1980s.

“Me and a course mate, Jan-Erik, lived on the second floor and we actually started with a midnight howl,” claimed Janne.

“Basically at the same time our course mate Nisse, who lived in the same building but three floors up, and some of his mates started howling at 10pm and since they attracted more followers we gave up after two to three days and joined the 10pm scream instead.”

The howling spread like wildfire and when some non-student residents in Flogsta called the police one night it was to no avail.

The cops did not know how to stop the nearly 2,000 students who were shouting out of their windows into the dark Uppsala night.