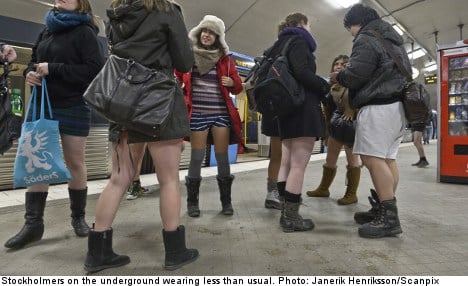 If you felt there was more Swedish flesh on show than usual on the weekend, you’re probably right.

Scores of Stockholmers shed their pants and inhibitions on Sunday afternoon – despite the thermometer pointing to minus 11 degrees – and took part in the annual No Pants Subway Ride.

“It’s always been a success since we started with just eight people back in 2009,” organizer Betty Jarra told The Local.

“And it works because it makes people happy, and it gets them to react. It doesn’t matter how they react – as long as they do.”

According to Jarra, people typically react with surprise, followed by a laugh, and then inquiry into the commuter’s sanity, she explained with a laugh, adding that the public’s reaction is part of the fun.

“People get engaged more than they usually do in Stockholm, and we think that’s important,” she said.

Video from the 2012 No Pants Subway Ride in Stockholm

While Jarra explains that it’s mostly elderly women who have the courage to strike up a conversation, the participants try to act casually, and often just respond with “I forgot my pants” as if it’s the most normal thing in the world.

But why show off your Scandinavian thighs and knobbly knees in the first place?

The idea was founded by a comedic performance art group based in New York City called Improv Everywhere. The organizers created the event in 2002, but it really got legs five years later when it was imitated worldwide.

Stockholm was one of approximately 60 cities worldwide to take part this year.

And for those worried about public hygiene following the bout of near-nudity, the group had strict guidelines to ease the minds of other commuters.

“If you don’t have proper underwear you will be breaking the law and that is not our intention,” the organizers warned on the group’s official Facebook page.

When asked if the event will continue next year, Jarra responded without hesitation.

“Of course it will, it’s always good for a laugh,” she told The Local.

“We’re creating happiness with the No Pants Subway Ride, and that’s the most important thing.”