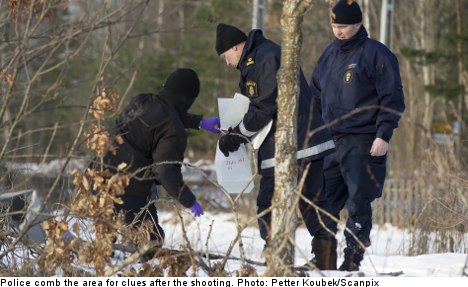 A gun was involved in the incident but the police would not give any details, nor would they specify what the woman’s injuries were.

The suspect is believed to have killed himself after fatally shooting at least one other man, also in his twenties.

The police were alerted at about 1am on Monday that a person had been injured in a house in Örebro County in central Sweden. Officers who arrived at the scene found a dead 24-year-old man and the injured woman.

“Shortly afterwards, we found another man, who had also died, in a house in Arboga not to far from the first house,” police spokesman Mats Nylén told the TT news agency.

After midday on Monday police announced that another body had been found in connection to the case, although officers were tightlipped regarding further details.

However, police indicated that the killings may have revolved around a relationship drama.

Arboga is across county lines, in Västmanland, but it appears Örebro police will investigate both deaths.

The police have confirmed they are treating the two deaths as related. One of the men is believed to be the initial aggressor.

“We’ll have to wait to find out what this concerned,” Nylén said.