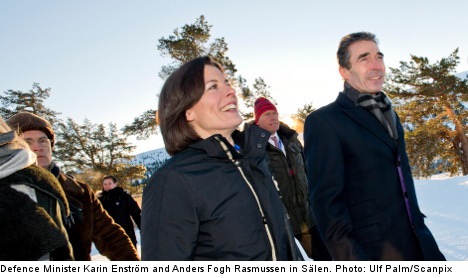 After Fogh Rasmussen was dropped off at the popular Swedish skiing resort Sälen by Blackhawk helicopter to attend the annual conference, he fielded questions from Swedish journalists, many of whom focused on whether Nato would ever rush to Sweden’s defence.

“I don’t want to go into that because it is a hypothetical scenario,” Fogh Rasmussen said.

“But collective defence only applies to Nato members.”

He explained that there were “limits” to Sweden’s cooperation with Nato and that partner countries like Sweden aren’t covered by Nato’s Article 5, which obliges members of the alliance to come to one another’s aid.

Recently, Sweden’s commander-in-chief Sverker Göranson said that Sweden’s scaled-back military has left the country vulnerable. Sweden, he claimed, can only defend itself for one week if it comes under attack.

“If a Nato partner brings a security issue to our table we will of course look at it but there is no guarantee,” Fogh Rasmussen, speaking in his native Danish, told journalists on Monday.

“You cannot be outside Nato but want everything that Nato can give. Sweden knows this and we will not meddle in whether it becomes a member.”

He still credited Sweden for being Nato’s “most active partner”. Sweden partakes in the Nato-led mission in Afghanistan, for example, and Swedish war planes patrolled the no-fly zone over Libya as western nations rallied to topple the regime.

“I have pointed out to your defence minister that the Nato Response Team will become increasingly important,” Fogh Rasmussen said as he wrapped up the Q&A session at the military conference in Sälen organized each year by the think-tank Society and Defence (Folk och försvar).

He also stressed that regional cooperation would become more important, on the same day that Sweden’s foreign and defence ministers wrote in an op-ed in the Dagens Nyheter newpaper that they wished for more Nordic tie-ups.

“There should be more regional cooperation in Europe,” Fogh Rasmussen said.

“You cannot do everything by yourself but you can do it if you have company.” 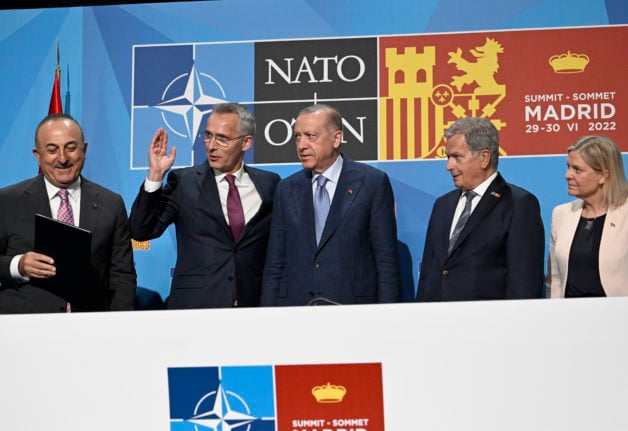 “Finland and Sweden, breaking decades of historic neutrality, are now wanting to join. It will be a difficult conversation,” he told reporters on the plane taking him to Madrid for a Nato summit.

“I think the key thing here is that… progress is being made,” he added. “I think it’s very important for our alliance that those two countries should be brought in.”

Turkish President Recep Tayyip Erdogan has stubbornly refused to greenlight the applications from the Nordic pair — lodged in response to Russia’s war on Ukraine — despite calls from his Nato allies to clear the path for them to enter.

He was expected to meet with US President Joe Biden on Wednesday on the sidelines of the gathering focused on responding to the Kremlin’s invasion of its pro-Western neighbour.

Turkey can essentially veto Finland and Sweden from joining Nato since all members must agree to taking on new members.

Ankara has accused Finland and more particularly Sweden of offering a safe haven to Kurdish militants who have been waging decades-long insurgency against the Turkish state.

The Turkish leader has also called on the two countries to lift arms embargoes imposed on Turkey in 2019 over Ankara’s military offensive in Syria.

Sweden and Finland went into the Nato meeting open to the possibility that Turkey might only lift its objections after the summit concludes on Thursday.

“We have made progress. That is definitely the case,” said Swedish Foreign Minister Ann Linde. “We are prepared for something positive to happen today, but also for it to take more time. We must be patient and continue discussions even after the summit.”

Finnish President Sauli Niinisto said he was neither “optimistic nor pessimistic at this stage”.

But Erdogan said he wanted to see the results of preparatory talks held on Monday in Brussels before deciding whether Sweden and Finland had done enough to lift his objections to their membership of Nato.

“We will see what point they (Finland and Sweden) have reached,” he said on Monday before flying to Madrid for the summit. “We do not want empty words. We want results.”

‘Interest of the alliance’

Speaking to reporters aboard Air Force One, US National Security Advisor Jake Sullivan said Biden and Erdogan would “at some point” meet on Wednesday on the sidelines of the summit.

But he stressed the United States was not adopting a “brokering role” and would leave the NATO secretary general in charge.

“Rather, we’re going to do what many other allies have done which is indicate publicly and privately that we believe it is in the interest of the alliance to get this done,” he added. “And we also believe that Finland and Sweden have taken significant steps forward in terms of addressing Turkey’s concerns.”

Analysts believe the meeting between Erdogan and Biden could play a crucial role in breaking down Turkey’s resistance to bids by Sweden and Finland to join the Western defence alliance in response to the war.

The two leaders have had a chilly relationship since Biden’s election because of US concerns about human rights under Erdogan.

Biden and Erdogan last met briefly in October on the sidelines of a G20 summit in Rome.

Erdogan’s ability to maintain a close working relationship with Russian President Vladimir Putin while supporting Ukraine’s war effort has made him an important player in the conflict.

But those ties have also complicated his relations with Biden and Nato. Washington has sanctioned Ankara for taking delivery of an advanced Russian missile defence system in 2019.

But Washington has signalled it may be willing to move past the dispute. Biden’s administration has dangled the possibility of supplying Ankara with older-generation F-16 jets that could replenish Turkey’s ageing air force fleet.

“The most important issue is the F-16 issue. It is still on the table,” Erdogan said of his upcoming talks with Biden.