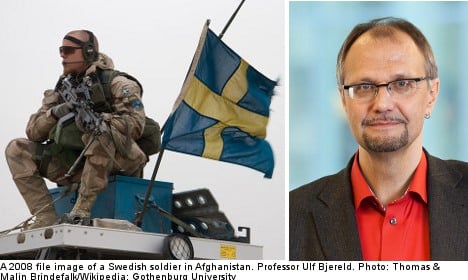 When Nato Secretary-General Anders Fogh Rasmussen spoke on Monday at the conference in Sälen organized by think tank Society and Defence (Folk och försvar), the hearts of many in the audience were aflutter.

There are many who yearn for Swedish Nato membership. This desire stems to some extent from realpolitik considerations based on the assumption that Sweden’s security would be enhanced if we became members of Nato.

But there is also a great deal of symbolism and identity tied up in the question of Nato membership. By not being a member of Nato, Sweden signals that we do not want to be a full part of the US-led security community.

There is a high probability that supporters of Nato membership in Sweden will be forced to live with their desires being unfulfilled.

According to the most recent survey conducted by the SOM Institute at Gothenburg University, only 19 percent of respondents felt that Sweden should apply for Nato membership.

By comparison, 44 percent of respondents said that Sweden should not join Nato.

So why is Swedish people’s opposition to Nato so massive?

It’s not the result of indifference or a desire for isolationism. On the contrary, Nato opponents are as much in favour as Nato supporters are of Sweden’s international engagement and security cooperation with other countries.

The difference is that Nato opponents want that cooperation to be carried out on a voluntary basis, outside the binding obligations of the Nato treaty.

There are three main explanations for Swedes’ resistance to Nato.

The first explanation is based on Sweden’s historical experience. Sweden is unique in Europe in that we have not been in a real war in 200 years. This long period of peace has for many come to be associated with Sweden’s freedom from military alliances and the neutrality policy that characterized Swedish security policy, especially during the 1900s.

Neutrality and non-alignment have become part of the Swedish self-image and a valued expression of the country’s independence and autonomy. These types of national self-images tend to stick and are difficult to change.

Rather, the majority of Nato opponents believe membership in the military alliance would increase the risk that Sweden would be dragged unwillingly into military conflicts. Nato is an organization associated with war and acts of war, not with peace and security-building measures.

The third explanation is that Sweden, as a member, would become part of Nato’s nuclear weapons doctrine.

Opposition to nuclear weapons has long been fierce in Sweden, and Sweden has also had a strong profile in international disarmament negotiations.

Nato has no nuclear weapons missions planned for the foreseeable future, but the Swedish people do not want to get involved in the handling of nuclear weapons. Nor do they want be associated with a nuclear weapons doctrine, regardless of whether or not weapons are presently ready for use.

Swedish public opinion about Nato will not change by itself.

If Nato supporters want to see a change, they must work to get political parties to actively push the issue with electorate.

So far, the ruling Moderate Party hasn’t deemed the issue important enough to warrant taking such a step.

Ulf Bjereld is a professor in political science at Gothenburg University.