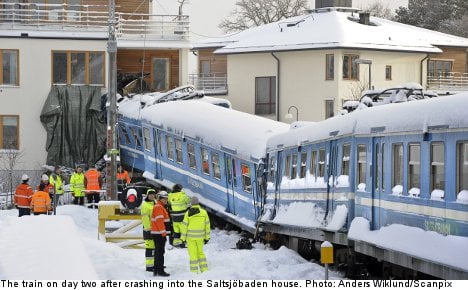 “It’s priority number one for our investigators to interview this person,” police spokesman Lars Byström told the TT news agency.

The young cleaner, who is said to be in her early 20s, managed to take the train from its depot on the Saltsjöbaden commuter line that connects central Stockholm to the upscale archipelago neighbourhood.

The joyride ended with the train ramming through the end-stop barrier and carrying onwards into the kitchen of a groundfloor apartment in a building situated about 25 metres past the end of the line.

“We estimate that she was going at about 70 kilometres per hour,” SL spokesman Jesper Pettersson told The Local on Tuesday.

Trains usually approach the station at 10 kilometres per hour.

She miraculously did not end up harming any of the residents.

The woman, who was employed as a cleaner by a subcontractor, was taken to hospital where doctors have said she has serious but not life-threatening injuries.

Her motives for taking the train at around 2am Tuesday morning, and how she managed to do so, remain unclear, but police are hoping to question her on Wednesday.

Meanwhile, SL met the press to explain some of the technical details related to the accident and its aftermath.

“We know that there was a key in the train and that the brakes weren’t on,” said SL CEO Anders Lindström.

SL said that to get a train into motion, the driver has to override a safety feature, either by pressing it down by foot or by hand.

Despite indications that the crash could be a deliberate act, SL said it left all unanswered questions to the police investigation.

SL are currently investigating how to remove the wreckage, which is embedded in the three-storey apartment block.