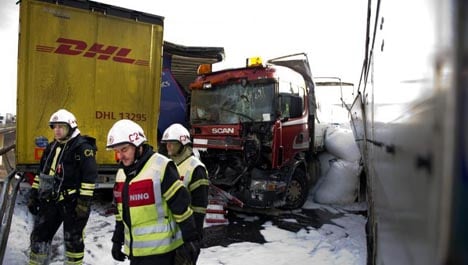 Arne Davidsson, head of the police investigation, said the domino effect collision began when three trucks heading north on the E4 on the low Tranarps Bridge ran into each other.

“We’ve been trying to figure out which vehicle is which so we can understand who was traveling in which truck,” he told the TT news agency.

He said the police had inspected almost all the trucks and cars involved in the crash, which caused chaos on the important motorway, but said suspicions that a lack of winter tyres was to blame seemed unfounded so far.

Driving conditions on Tuesday were hazardous due to dense winter fog and slippery roads.

Meanwhile, the Swedish Transport Administration (Trafikverket) dismissed fingerpointing at foreign drivers on Swedish roads. Some critics had said they were less likely to change to high-traction tyres once winter arrives.

“Even if they had the right tyres it wouldn’t have meant much. Those tyres are meant to help you advance and not get stuck.”

Other theories focused on speeding by professional long-haul truck drivers. Photographs from the chaotic scene showed a large number of lorries in the long pile-up on both lanes of the bridge near Helsingborg in southern Sweden.

Patrick Magnusson, traffic safety adviser at the industry organisation Sveriges åkeriföretag, does not think drivers are bad at adjusting to the road conditions, but admitted that many drivers, private car owners as well as truckers, should slow down.

“I can’t pretend that a lot of professional traffic doesn’t go to fast, it’s because the drivers are on very tight schedules.”

As long as they follow the three-second rule to keep their distance to the vehicle in front, he pointed out, the risks should still be low.

“Foreign drivers get an unfair amount of criticism. When it comes to the speed, they’re no worse than anyone else, but their trucks can be in a worse condition.”