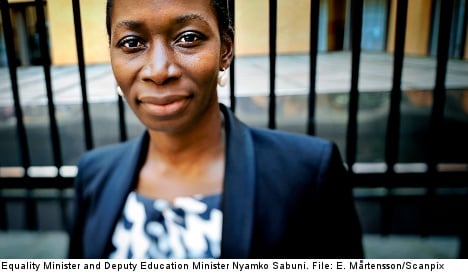 “Saying that you want power kinda sounds like you want to get into a fight, which is why internationally people have talked about ‘influence’ instead,” Equality Minister Nyamko Sabuni said at the conference, which was organized by Sweden’s labour ministry.

“But power is good, it’s fantastic, it gives you influence.”

When he served in the 1990s, Westerberg was hailed both as a superhero and scoundrel from opposite sides of the debate when he introduced a reform mandating that one month of parental leave had to be taken by the father.

Today, he is in favour of splitting parental leave evenly between the parents.

“It is one of the few tools left for politicians to influence the structure at home, which is were gender equality begins,” Westerberg said.

Strictly divvying up parental leave is not on the cards for the current government, however.

His successor, Margareta Winberg, said that, among Swedish voters, the question of gender equality was not ranked as important.

“Gender equality is not among the top five issues that Swedes think are important as election issues,” she said.

“So there’s a need to build up the topic, to shape public opinion.”

She joked that when she went on to become agriculture minister, which overlapped for two years with her ministerial post overseeing equality, the then Left Party leader Gudryn Schyman, who went on to create the Feminist Initiative party, used to call her “the minister for women and heffers”.

Winberg, when she headed the Social Democrat women’s association (S-kvinnor) in the early 1990s, is famous for pushing her party to strictly alternate between male and female candidates on the party list before elections (Sweden has proportional representation election system).

The alternate policy, dubbed “varannan damernas” (‘every other for the ladies’), was later adopted by most political parties in Sweden and is widely credited for making Sweden’s parliament the most gender equal in the world at the time.

Wrapping up the debate on Thursday, Winberg turned to Sabuni, who’d earlier in the discussion admitted her ministry does not do a good job at publicizing the work they do, and challenged her to improve her efforts.

SAS
‘We agree to disagree’: Still no progress in marathon SAS strike talks