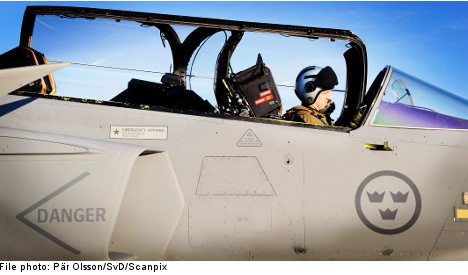 The pilot’s commander at the F21 squadron in Luleå in northern Sweden has written to the Swedish Armed Forces Disciplinary Board (Försvarsmaktens Personalansvarsnämnd) to recommend dismissal.

According to the commander’s report, the 26-year-old pilot performed several rolling manoeuvres with the aircraft at very low altitudes.

“He has exposed himself, state property and third parties to far more serious risks than is acceptable,” the report stated.

He was furthermore found to have attempted to cover up his reckless behaviour by failing to filing to file a report of the incidents and by later lying to officers when questioned.

The report details how the 26-year-old’s employers had subsequently lost all confidence in him due to his actions and the attempted cover up.

“The employer lacks confidence in him as an individual and consider him therefore plainly unsuitable as a pilot and an officer.”

The Jas 39 Gripen is a single-engine fighter manufactured by the Swedish aerospace firm Saab.

After experiencing early problems during testing the aircraft finally entered service in 1997 and more than 240 Gripens had been ordered as of 2012.

The Swedish government announced last week that it had authorized the purchase of 60 new Jas 39 Gripens to replace the current stock.