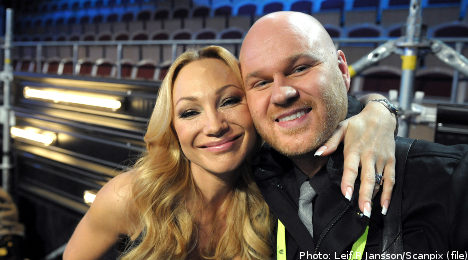 Fredrik Kempe with Charlotte Perrelli after winning the Melodifestivalen in 2008

According to a report in the Aftonbladet daily on Saturday citing a “well-placed source”, Kempe’s song will be performed by Girls Aloud singer Kimberley Walsh.

40-year-old Fredrik Kempe has a long Eurovision pedigree having penned successful hits for the likes of Charlotte Perrelli and Malena Ernman in the past.

Sweden won the 2012 title and while none of Kempe’s songs came close to being selected for Baku, the UK it seems is hoping that the Swedish connection will help the country avoid another final fiasco in Malmö in May.

In stark contrast to Sweden’s success, the UK suffered the ignominy of coming a distant last in 2012 with a song performed by ageing crooner Englebert Humperdink.

The reports have however not been confirmed and Girls Aloud’s PR firm took to Twitter on Friday to distance the band from the rumours.

Kimberley Walsh is however lining up a solo album debut for release in February and most of the material was recorded in Stockholm, according to the Aftonbladet report.

Despite the denials however, speculation linking Walsh, Kempe and the popular song fest persisted into the weekend with Irish state broadcaster RTÉ citing reports that the Girls Aloud quintet remained the country’s top choice.