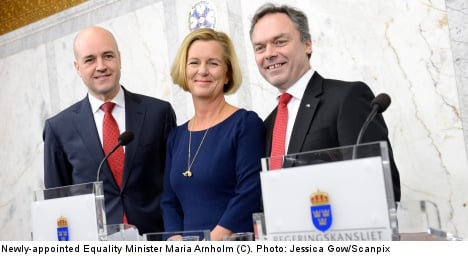 At a press conference on Monday morning held at government headquarters Rosenbad, the prime minister and the deputy prime minister introduced Maria Arnholm of the Liberal Party (Folkpartiet), who replaces Nyamko Sabuni as she steps down from her job as equality and integration minister.

Between 1991 and 1994, Arnholm was chief of staff for Bengt Westerberg, the Liberal Party minister who introduced the “daddy month” (pappamånad) that only men could take off when they became parents.

“I was proud and happy to work with Westerberg when the reform took place,” Arnholm said on Monday.

“We now have two daddy months but we also have the equality bonus, and I want to wait and see how that plays out before making another move.”

Although her predecessor last week announced it was time to discuss whether legislation was needed to make the Swedish business world more gender equal, Arnholm said it was time for “dialogue and conversation”.

“It’s remarkable that everyone thinks inequality is horrible but nothing happens,” she said.

Arnholm, born 1958, said she had been aware of inequalities between men and women since her teenage years in Gothenburg during the 1970s.

Before returning to politics, she was the CEO of a PR and marketing company as well as head of communication at the food cooperative Coop, among other jobs.

Although Sabuni had previously said she would step down before the 2014 parliamentary elections, her resignation on Monday was unexpected.

Her replacement was “the most probable choice,” said Maria Crofts, senior political reporter at the Dagens Nyheter newspaper.

Crofts said Arnholm’s appointment as top aide in 2012 was probably part of preparing for her to take over.

Arnholm, she said, had a long history of political engagement both within the Liberal Party and gender equality questions.

“She’s the one who convinced me that we should introduce the daddy month so I hope she’ll pursue it further,” he told TT.