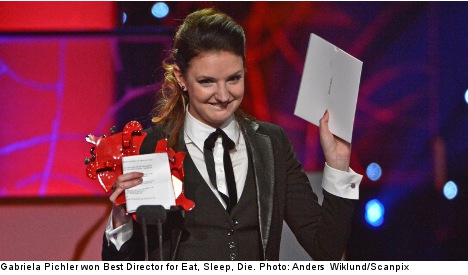 “I want to thank the actors who gave so much of themselves to this script,” Eat, Sleep, Die director Gabriela Pichler said in accepting the Best Director award for her feature-lengthe directorial debut.

In addition to best film and best director accolades, Eat, Sleep, Die also earned Pichler an award for Best Screenplay, while debutante Nermina Lukač won the Best Actress prize for her depiction of Raša, the character at the centre of the film.

“This is the first film I've ever been a part of and it means a lot to win this Guldbagge,” Lukač said after getting the best actress nod, according to the Expressen newspaper.

While Eat, Sleep, Die claimed many of the high-profile prizes at the Monday night gala, its overall award tally was equaled by Call Girl, a political thriller loosely based on a 1970s political scandal in Sweden, which won four awards, including Best Cinematography, Best Costumes, Best Sound, and Best Set Design.

Johannes Brost took home the Best Actor award for his portrayal of Janne in Avalon, a tale about a 60-year-old party organizer who finds his life turned upside down following an accident.

Avalon co-star Peter Carlberg won the best supporting actor award, while Ulla Skoog won for her role in The Last Sentence (Dom över död man), a film directed by Jan Troell based on the life of journalist Torgny Segerstedt, who warned Swedes about the threat of fascism in the 1930s.

Palme, a documentary about slain Swedish prime minister Olof Palme picked the award for Best Editing as well as Best Music, thanks to a soundtrack by Abba star Benny Andersson.

And as expected, the Oscar-nominated documentary Waiting for Sugar Man took home the prize for Best Documentary.

Awarded annually since 1964, the Guldbagge, or Golden Beetle, is the Swedish Film Institute's award for achievements in film from the previous year. The beetle-shaped award was designed by Swedish sculptor Karl Axel Pehrson.