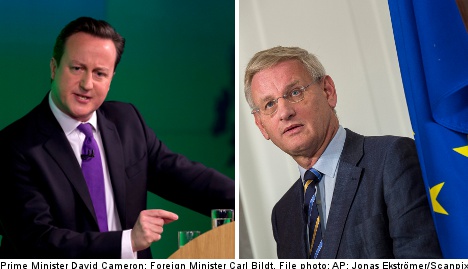 In a series of tweets, Foreign Minister Carl Bildt stressed the importance of European Union integration and said Europe needed to stick together and speak with one voice.

“Soon we Europeans will be only seven percent of global population. We can only promote our values and protect our interests if we work together,” Bildt wrote on Twitter.

He quoted Cameron’s own reference to the weight Britain’s voice carries as a member of the EU, where the British leader said: “We are more powerful in Washington, in Beijing, in Delhi because we are a powerful player in the European Union.”

Bildt responded “Yes, so far…,” seen as a warning that Britain risked losing that influence if it walked away from the 27-member bloc.

Sweden considers Britain a strong ally in the EU, seeing eye-to-eye on a number of key issues. Both countries have chosen to remain outside the eurozone, and both are in favour of sweeping EU budget cuts.

“I want a useful union not a noncommittal network,” she added.

Cameron on Wednesday promised to hold a referendum by the end of 2017 giving British people the choice of staying in or leaving the EU if his party wins the next election.