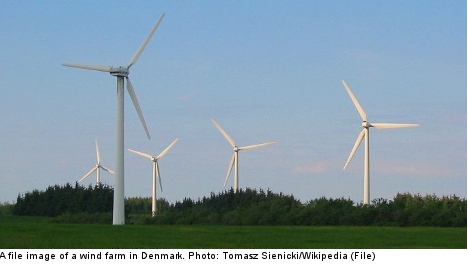 The proposal, part of a report presented on Tuesday, focused on wind power as a key to making the Nordics – Iceland, Finland and the Scandinavian countries – climate neutral by 2050.

The authors suggest that such an investment, along with upgrades to the grid, would cost 0.7 percent of the region’s annual GDP – about 3 trillion kronor ($460 billion) in total over the next 27 years, according to a calculation by Sveriges Radio (SR).

“In the global 2°C Scenario, energy-related CO2 emissions in the Nordic region must be reduced by 70 percent by 2050 compared to 1990,” the report authors summarized.

The report suggested the use of fossil fuels be halved and account for only 20 percent of total electricity generation in the future.

In order to do so, relying on extensive wind generation “needs to grow particularly quickly and alone accounts for 25 percent of electricity generation in 2050.”

Such a move, however, would place demands on refurbishing parts of the distribution network.

“This will increase the need for flexible generation capacity, grid interconnections, demand response and storage,” the report authors wrote.

They highlighted that the region’s access to hydropower and ambitious domestic targets were in the Nordic countries’ favour in achieving climate neutrality.

Yet, Swedish industry association Svensk Energi noted in a response that wind turbines are still not completely accepted in Sweden.

Chair Kjell Jansson told SR there needed to be more focus on the technology from the politicians’ side.

“I think with today’s attitude it would be difficult to put this in place,” he said.

“One has to accept new things, for example turbines in places where people now resist them, if we are to meet our climate target.”