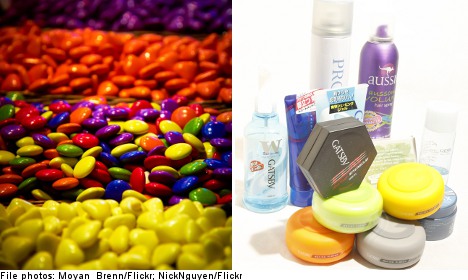 The woman, who lives in Örnsköldsvik in northern Sweden, claims that due to her obsessive compulsive disorder, she needs to buy 92 cans of hairspray and 26 containers of make-up each year.

Furthermore, she claims to she must spend 800 kronor ($123) per month on candy to suppress her binge-eating craves and also shells out a substantial sum on snus, a moist snuff tobacco product popular in Sweden

After having her disorder medically certified by a doctor, the 35-year-old lodged a benefits claim in 2011, asking the Swedish Social Insurance Agency (Försäkringskassan) to pay her roughly 200,000 kronor ($30,725) to recoup the costs she incurred on sweets, blushes, and concealers.

The agency approved the woman’s claim, agreeing to pay her 2,461 kronor per month, the highest payment allowed under Sweden’s rules for disability compensation (handikappersättningen).

People who receive benefits need not have a specific illness or disability, but instead must provide a note from a doctor certifying that their condition has a negative impact on their ability to work, study, or carry out the tasks of daily life.

Depending on the severity and costs of the disability, compensation is paid at 36, 53, or 69 percent of the base amount (prisbasbeloppet), an inflation-adjusted figure used to calculate various state benefit levels in Sweden.

Following an appeal by an independent arbiter who reviews controversial compensation claims, the woman saw her benefits reduced from 69 percent to 53 percent of the base amount.

Now, however, officials have reviewed the case again and want to lowering the woman’s benefits to 36 percent.

“The woman’s disability can not be considered to be require costs of this magnitude and should, therefore, not be accepted,” Birgitta Smedberg, who is in charge of the case for the insurance agency, wrote in her latest appeal.

According to Smedberg, it’s nearly impossible to determine if the purchase of make-up was actually a form of therapy for the woman’s disorder.

“There are difficulties in deciding costs in cases like these,” Smedberg told The Local.

“The laws are unclear, and because of this, I want the courts to make the decision.”

Meanwhile, the 35-year-old is outraged at the prospect that she may see a reduction in her current compensation.

“I think it’s awful that they want to reduce it further,” she told the Expressen newspaper.

“I can hardly keep it together as it is now.”

Despite news of the hairspray and candy addiction making headlines across Sweden on Thursday, Smedberg refused to be swept up by the circus.

“I can’t understand why this story has been so popular,” she told The Local.

“We’ll just have to see what the court has to say when they get around to the case.”