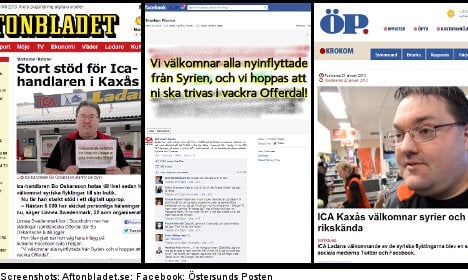 Oskarsson’s unexpected ascent to nationwide recognition began with a humble posting on the Facebook page of the Ica grocery store he runs in Kaxås, a small village in Offerdal, nestled among the hills and forests of the northwestern Swedish county of Jämtland.

“We welcome all those newly arrived from Syria and we hope that you’ll enjoy beautiful Offerdal,” read the post, published on January 18th.

According to Oskarsson, three families from Syria had recently moved to Kaxås, marking the first time the village had ever had refugees among its roughly 150 inhabitants.

The new arrivals are part of an influx of 17 Syrian families moving to Krokom, the municipality of nearly 14,500 residents where Kaxås is located.

Last week, Oskarsson met some of the newly arrived Syrian refugees in his Ica shop and felt compelled to do his part to make them feel welcome in their new home.

It didn’t take long before the Facebook greeting went gangbusters on social media, garnering well over 2,000 likes and 1,000 shares on Facebook and spawning its own hashtag on Twitter, #ICAKaxås, which for a time was one of Sweden’s top-trending hashtags.

“I thought we should welcome them to Kaxås. I arranged a picture with the Syrian flag in the background and a short text,” Oskarsson told the local Östersunds Posten (OP) newspaper.

“I put it out on Facebook and it didn’t take long for the comments to explode.”

Oskarsson explained that he planned to add halal meat to the selection of foods available at his shop, as well as sweet potatoes and tahini, a paste made from ground sesame seeds common in Middle Eastern cuisine.

By Tuesday, Oskarsson had been featured in several Swedish newspapers, prompting comments from celebrities and commentators mystified over the fact that more Swedes seemed to be talking about a local grocery store than news that Swedish Equality Minister Nyamko Sabuni was stepping down.

“Every now and again you catch a glimpse of a hero. First time I’ve been proud to have an Ica-card,” tweeted author and comedian Jonas Gardell along with a link to the story.

While most of the attention was positive, Oskarsson also found himself the target of criticism and threats from those critical of Swedish refugee policies.

“Someone wrote that I should be hung from a lamp post,” he told the Aftonbladet newspaper.

After more and more racist comments began to appear on the shop’s Facebook page, Oskarsson opted to remove the post.

But supporters of Oskarsson rallied their forces later in the week, with 22-year-old Stockholm resident Linnea Swedenmark organizing an online petition allowing people to send greetings to the shop owner.

Swedenmark told Aftonbladet she was blown away by the response.

“I hoped that maybe 50 would write, but now nearly 5,000 have written personal greetings,” she said on Thursday.

She said she hopes Osckarsson is “surprised and moved” by the responses, which she plans to collate and pass along at the weekend.

Politicians have also expressed their support for Oskarsson, with Green Party leader Gustav Fridolin posting a picture on his Facebook page of him holding a sign, written in Swedish and Arabic, inspired by the shopkeeper’s message.

“We welcome all those newly arrived from Syria and we hope that you’ll enjoy beautiful Sweden,” the sign read.

When reached by The Local, Oskarsson admitted the threatening comments were “unfortunate and unsettling”, but remained upbeat about his efforts.

“It’s been unbelievable. It’s funny to see how things evolve on social media,” he said.

He explained that he and his staff have received mostly positive feedback over his efforts to make some of Kaxås’s newest residents feel welcome.

Oskarsson sees the refugees as a needed boost for the area’s dwindling population, but remains baffled that his Facebook experiment has engaged people across the country.

“We only created the page to make it easier to publicize offers to our regular customers,” he said before hastily drawing the conversation to a close.

“I’ve been doing interviews for four days and need to get back to work.”