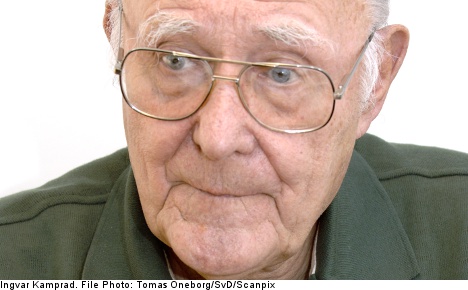 “I spoke to my secretary who told me about what was written in Dagens Industri, that we’ve had a record profit and record revenue and that we would build 25 new stores per year,” he told the Expressen tabloid.

The comments had been made by Ikea chief executive Mikael Ohlsson in business daily Dagens Industri on Wednesday as the company released its yearly earnings report.

“We’ve talked about building 10 to 12 stores per year until 2020 and I don’t know who released this information,” said the 86-year-old, who only rarely speaks to the media.

The Swedish billionaire also claimed to be surprised by a Tuesday announcement that the group plans to build hundreds of new homes and a third Ikea store just south of Stockholm’s city centre.

“I (had) no idea that an Ikea store would be built … in south Stockholm, I haven’t heard that,” he said.

Kamprad retired from the management of Ikea in 1986, but he still holds the post of senior advisor to the supervisory board of Ingka Holding, the Netherlands-based parent company of the Ikea Group.

A spokeswoman for Ikea, Josefin Thorell, told AFP that plans for 25 new stores per year had the backing of Ingka Holding’s board, and that Kamprad was “very involved” in that company.

“I don’t know what’s behind the misunderstanding. It may be that Ohlsson and Kamprad are talking about different time periods,” she said.

Ikea said on Wednesday that its net profit rose eight percent this year to €3.2 billion in the fiscal year ending August, on the back of its strongest revenue growth since 2006.