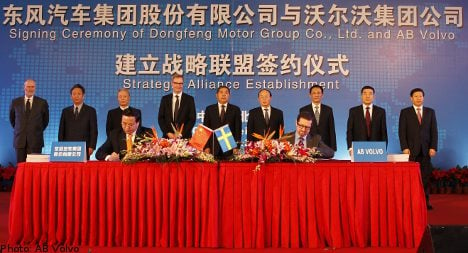 The firm announced on Saturday that it had agreed to pay almost 5.8 billion kronor ($900 million) for the stake in the Hubei-based firm, which is a newly formed subsidiary of Dong Feng (DFG).

“The deal is a fantastic opportunity for us, and gives us a strong position in the world’s largest truck market. The Chinese market is as big as USA’s and Europe’s combined,” said Volvo’s spokeswoman Kina Wileke to the TT news agency.

The deal is conditional on the approval of competition authorities and is expected to take around 12 months to complete. But according to Wileke it establishes AB Volvo as market leader within heavy trucks, overtaking Daimler.

Volvo will make payment of the some 5.6 billion Chinese Yuan sales price at the completion of the deal. Dong Feng will retain the remaining 55 percent in DFCV.

The deal will increase AB Volvo’s net debt by around 6 billion kronor and the firm declined to specify how the purchase will be financed.

“We are not telling,” Kina Wileke said.

According to Wileke, the deal is the largest single industrial investment by a Swedish firm to date in China and she assured that there are no plans to shift jobs from Sweden to China.

“As it looks now we are not going to move any jobs from Sweden to China as a result of this deal, on the contrary it creates employment. When we create jobs overseas, it also creates jobs in Sweden,” she said.

AB Volvo’s CEO Olof Persson called the partnership with Dong Feng “the best of both worlds” in a press statement.

“Dong Feng is a partner we know well, which we have worked with over the course of several years and which has a leadership and a product assortment which we really like,” he said.

Persson identified benefits for both firms from the deal, pointing out the “excellent opportunities for economies of scale within purchasing, development and production within Volvo concern’s truck operations”.

The firm’s head office is located in Wuhan in Hubei province and its truck operations and manufacture are concentrated in Shiyan, also in Hubei.