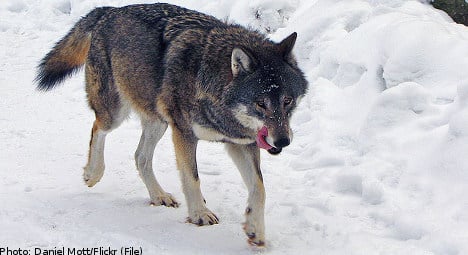 “Now I have seen it on film and I can definitely say that it is a wolf,” said conservation officer Nelly Grönberg to the local Göteborgs Posten (GP) daily.

The wolf was first spotted last Friday, according to the newspaper, with further sightings reported on Friday night in the suburbs of Västra Frölunda and Långedrag.

During Friday night it is known to have wandered into central Gothenburg and was caught on film at Stigbergstorget in the Majorna district.

The wolf was then spotted on Saturday morning in the Slottsskogen city park.

Gothenburg conservation officers attempted to track the animal on Saturday, with Nelly Grönberg expressing concern over its well-being.

“This environment is not suitable for a wolf. As far as we know it hasn’t caught any significant prey and is probably both hungry, anxious and scared,” she said to GP.

Grönberg insisted that the wolf poses no threat to humans, explaining that the animal tends to become docile when stressed and scared.

New attempts to track the wolf will be made on Sunday with the option of using a tranquillizer to assist in its re-location having been discussed.

Grönberg however expressed confidence that the wolf will be able to find its way out of the city by itself.

Fatal attacks by wolves against humans are rare in Sweden, with less than 20 recorded cases in the past 300 years.

However the risks posed by wolves to humans was brought into focus by the death of a 30-year-old employee at Kolmården zoo in central Sweden in June.