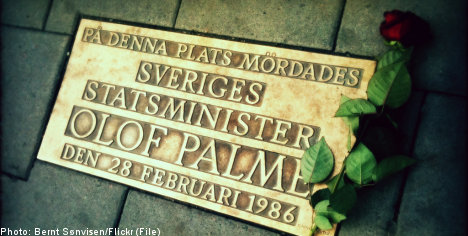 “I know that there was a police conspiracy to shoot Palme. I’m not saying that I think this… I know it. I was asked to carry out the murder myself,” said the man, a weapons expert, to the Aftonbladet newspaper.

This man, who the paper referred to as Johan, claimed that he was asked by a police officer to pull the trigger on Palme several months before the PM was actually murdered in February 1986.

The assassination request allegedly took place in Stockholm in mid-December, 1985, when Johan had dinner with a high ranking police official known for his “extreme right-wing views”.

“During our conversation, my guest suddenly wondered if he could ask me something. Before he went into details about what it concerned, he said in a threatening voice that I had to promise to keep quiet about it,” Johan told the paper.

“I promised. Then he asked if I wanted to shoot Palme,” said Johan, who is also a hunter and pistol expert.

“I tried to laugh off the whole thing by saying: ‘You know full well that I can’t do it, the weapon could be traced directly back to me’. My friend responded that of course it wouldn’t be my weapon that was used.”

The man’s confessions were given to Gunnar Wall, a journalist who has written two books about the Palme murder.

Criminologist Leif G.W. Persson, however, told the paper that such confessions are a dime a dozen and that everyone “from plumbers to restaurant owners” have made similar claims over the years.

“It’s far too abstract and vague. He doesn’t want to say who the policeman is. The next question is clearly: ‘What is the name of the person who asked you to do this?'” Persson told Aftonbladet.

“Then you can ask why the policeman asked him, and what the policeman was doing at this particular time. These are the questions that need to be asked before this can be anything more than just shrugged off.”

The case of Palme’s murder is ongoing in Sweden and in late December 2012 the case was taken over by Detective Superintendent Dag Andersson.

Olof Palme, a Social Democrat prime minister, was gunned down in central Stockholm on February 28th, 1986.

At least 130 people have confessed to the murder.