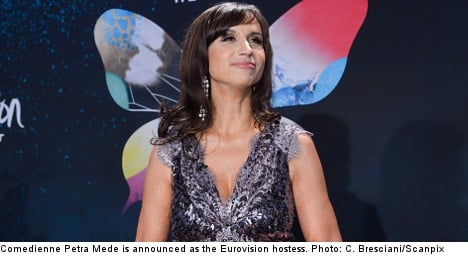 Mede said she had accepted the job immediately.

“I’ve learned during my 42 years on the planet that saying ‘yes thanks’ is a lot more fun than ‘no thanks’,” Mede said.

“Eurovision unites people of all cultures, even if it’s just for a week or two, who despite their differences come together to celebrate music,” said Mede, who wore a shimmering metallic gown by Swedish designer Lars Wallin for the press conference.

Before breaking into show biz, Mede worked as a tourist guide in Stockholm’s Old Town, working in Spanish. She also speaks French.

In 2009, she hosted Melodifestivalen, Sweden’s televised competition to find the country’s entry to the Eurovision each year. She has also hosted Sweden’s national film award show, Guldbaggegalan, the Swedish equivalent to the Oscars.

Apart from having her own show, she has also participated in the political satire programme Parlamentet and currently hosts reality programme Maestro, in which Swedish celebrities learn how to become conductors.

She said she had been taking elocution lessons in English in preparation for the contest.