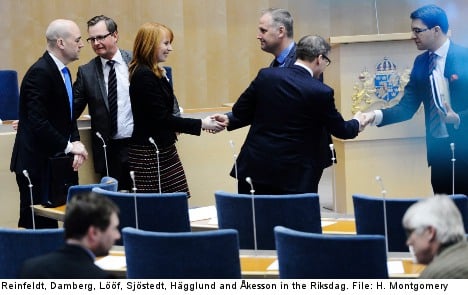 The anti-immigration Sweden Democrats recorded the steepest upswing, increasing its membership compared to 2011 by 48 percent. As 2012 drew to a close, the party had about 7,900 members.

The Left Party, which attempted to help wrest power from the centre-right government in the 2010 elections by cooperating with the Greens and the Social Democrats, have seen a 9-percent increase in its membership numbers.

“The numbers paint a clear picture, people are heading away from the centre to the outer-lying fringe parties,” Gothenburg University political scientist Mikael Persson told the TT news agency.

The Green Party, meanwhile, has taken the biggest beating in membership numbers, losing 9 percent of its members.

“It’s quite common to lose members in between elections and then see the numbers go up in an election year,” the Greens’ party secretary Anders Wallner told the TT news agency.

The two main parties, the Social Democrats and the ruling Moderates, lost 5 and 4 percent of their members respectively.

“There’s a good mood in the party and we’re recruiting a lot of new members, many of whom are young,” said Carin Jämtin, party secretary of the Social Democrats, a party with a notoriously high average age for its members.

“That we despite this are losing members mean we have to work even harder,” she told TT.

Among the remaining parties, the Christian Democrats saw numbers go down by 3 percent and the Centre Party by 5 percent, while the Liberals (Folkpartiet) have yet to publish their membership figures.

Overall, Swedes are less likely today to be members of a political party than in the past. Fifty years ago, about 20 percent of eligible voters were members of a party. In 2010, that number had sunk to 3.7 percent.

In the 1990s alone, the parties lost about a third of their members.

While some observers fear a lack of political engagement is a symptom of a disengaged populace, it is an analysis not shared by political scientist Mikael Persson.

“There is no evidence that the young are less engaged today than previous generations were,” he told TT.

“But their involvement takes different expressions and they deselect the parties.”