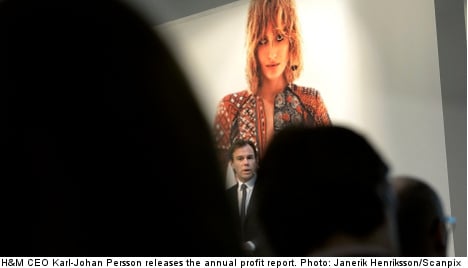 “H&M continues to stand strong in a challenging clothing market, which in many countries has been even more challenging in 2012 compared to 2011,” chief executive Karl-Johan Persson said in a statement.

Shares in the company, meanwhile, fell by 2.9 percent on the Stockholm Stock Exchange after failing to meet analysts’ expectations in the final quarter of 2012.

The company said its earnings were hit by the costs of its long-term investments as well as negative currency exchange effects.

It proposed holding the dividend steady at 9.5 kronor per share.

H&M said its expansion moved faster than expected in 2012, with 304 new stores opening their doors, primarily in China and the United States.

The company which makes and retails inexpensive clothes currently has 2,800 stores in 48 markets and more than 104,000 employees.

It said it plans to open 325 stores in this financial year, including in Chile and in Indonesia via franchising.

H&M said its new fashion brand & Other Stories, targeted at women, will open its first stores in the coming months in seven European countries.

Persson said that despite not yet generating revenue the company believed its long-term investments “to be both necessary and wise as they aim to secure future expansion and profits and thereby further strengthen H&Ms position.”