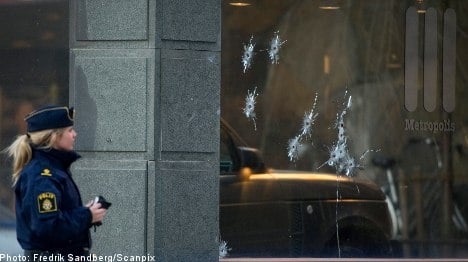 The officer was charged after eight of his twelve shots hit the Metropolis gym on Birger Jarlsgatan in Stockholm, where three women were training. The women were not injured.

The policeman was aiming at three thieves who were mid-escape from a jewellery store. It later emerged that the thieves had not fired a single shot and that their gun was a harmless starter pistol.

The 34-year-old policeman said he had the right to shoot at the getaway thieves as they had pointed a weapon at officers. The court agreed, but still ruled that the man had put the women in the gym in unnecessary danger.

The court claimed that after the first shots, the policeman should have changed tactics and taken cover behind one of the nearby parked cars.

The policeman crossed the line, according to the court, when he bent down to reload his weapon as he had already fired eight shots. It was the last four shots that were responsible for his fine.

“When the shooting continued, he had reached a point where he should have restrained himself. He could have stopped and protected himself rather than continue shooting,” Judge Lena Egelin told the TT news agency.

The three women in the gym requested damages, although these requests were not granted by the court.

The three robbers were sentenced to prison in May, for between one and a half and four years.