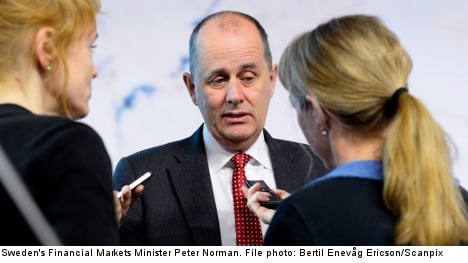 On Wednesday, Swedbank announced a huge profit increase for the year-end quarter in 2012, raking in 4.98 billion kronor ($781 million), up from 1.75 billion the year before, prompting it to nearly double its dividend from 5.30 kronor per share to 9.90 kronor per share.

Partially state-owned Nordea also reported a 19 percent profit hike for 2012, resulting in a 30 percent increase in its dividend pay-out.

”Profits have reached such heights that it shows there isn’t a good balance between sellers and buyers,” Norman told the TT news agency on Wednesday.

”If the customers approached the bank on more equal terms they’d be better at negotiation interest rates and fees.”

On Thursday, the SEB bank joined the swelling ranks of high-profitability Swedish banks, lifting its share price by 0.8 percent on the Stockholm Stock Exchange.

“We have attracted close to 300 large corporate clients in Merchant Banking and for the first time been recognized as the leading corporate bank in the Nordic region,” CEO Annika Falkenberg said in a statement.

The board proposed doubling SEB’s dividend to 2.75 kronor per share, making it the third bank to reward shareholders amid swelling profits.

Anders Borg, Sweden’s finance minister, has warned the banks repeatedly over the past year that they face tougher regulations. Financial commentators noted this week, however, that he had dampened the tone of his critique.

“We were worried that if they paid out such high dividends, they wouldn’t be able to increase their capital,” he told TT on Wednesday.

“But now we can see tangible increases in the banks’ capital reserves.”

Borg did, however, put his weight behind Norman’s reticence concerning bank customers.

”We have to keep talking about housing loans. I don’t think it’s reasonable to keep profits up through mortgage lending,” Borg said.