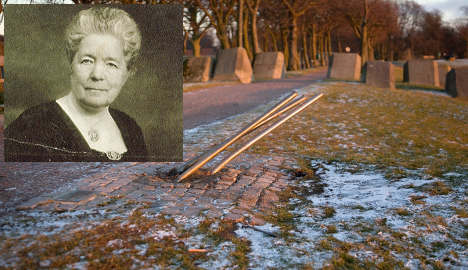 The statue of Selma Lagerlöf, most widely known for her children’s book The Wonderful Adventures of Nils, was erected on the spot in 2009.

The author, who was the first woman to win the Nobel Prize for Literature in 1909 lived in the Skåne coastal town for 12 years at the end of the 19th century.

Lagerlöf, whose face adorns the 20 kronor note, arrived in the town as a newly examined teacher and left 12 years later as an established writer.

The 165 centimetre statue was placed on the beach boulevard in the town in commemoration of her Nobel prize win.

Aside from The Wonderful Adventures of Nils, Lagerlöf was a prolific writer throughout her life, accumulating a broad body of work.

Other noteworthy titles include Jerusalem, penned after a visit to the American Colony in the city and The Story of Gösta Berling.

Aside from her writing, Lagerlöf was a high-profile feminist and active within the women’s suffrage movement in Sweden.