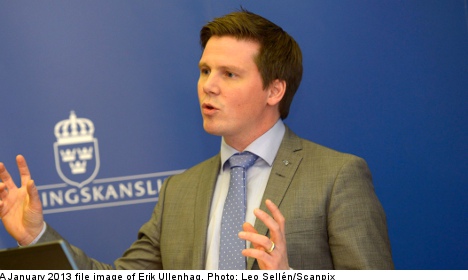 Billström caused a stir at the weekend when he called for a reduction in the “volumes” of immigrants coming to Sweden.

“Today Sweden is one of the countries that receives the most immigrants in the EU. That’s not sustainable,” he told the Dagens Nyheter (DN) newspaper in an interview published on Saturday.

Despite Billström’s comments, made in the context of his Moderate Party’s efforts to revamp Sweden’s current immigration and integration policies, Ullenhag, a member of the Liberal Party (Folkpartiet), said on Tuesday that no changes in government policy were in the works.

“It’s important for the Liberal Party to defend a humane asylum policy and for us to be open to the world,” he said at a conference about Somalis’ integration in Sweden arranged by the Fores think tank, according to Sveriges Radio (SR).

“Different parties have different policy programme groups. There are no plans from the government to tighten asylum policy.”

Ullenhag went on to discuss the challenges facing Somalis who have come to Sweden in the last two decades, explaining that one of the impediments to integration has been the difficulty they’ve had reuniting with relatives in Sweden.

There are currently 40,000 Somali immigrants in Sweden, according to SR, and the Migration Board (Migrationsverket) expects 20,000 more asylum seekers and accompanying family members to arrive in Sweden in the next year, making Somalis the fastest growing immigrant group in Sweden.

Ullenhag went on to emphasize that Sweden could draw upon lessons learned from its experience in accepting large numbers of refugees from the Balkans in the 1990s, an immigration wave that he said was bigger than the current flow of refugees from Somalia.

“Many of the same questions were asked then. But today we see that many of those who moved from the Balkans have become a part of Swedish society, have a job, and contribute, and thus many prejudices have been broken, and that’s exactly the same journey we need to make with people who have moved from Somalia,” said Ullenhag.