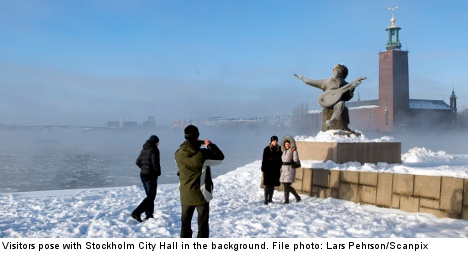 “The unease in Europe contributed to visitor numbers from western and southern Europe decreasing during 2012,” the Agency for Economic and Regional Growth (Tillväxtverket) said in a statement.

IN PICTURES: See our pick of the top six sights in Stockholm

The only European countries whose visitors to Sweden did not drop off were Switzerland and Ireland.

The far-flung travellers made up for the slump in European visits, allowing the Swedish tourism sector to welcome 0.4 percent more visitors overall compared to the year prior.

Measured in the number of overnight stays in Sweden, Chinese tourist numbers went up by 11.2 percent. American visits increased by 6.6 percent.

IN PICTURES: Top eight free things to do in Stockholm

Visitors from Japan also increased in numbers, but Indians crept past them in the tourist-league table.

SEE ALSO: Stockholmers speak out about the best places to go as a tourist in the city

Revenue at hotels, hostels and holiday cottages increased to 19.4 billion kronor ($3 billion), an upswing of 0.8 percent since 2011.

“Tourism creates 160,000 jobs and is important to the Swedish economy,” the agency director-general Birgitta Böhlin said in a statement.