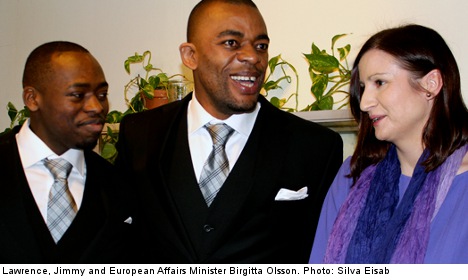 “They basically blamed me being gay and me bringing shame on Uganda on her,” an audibly rattled Sswerwada told The Local on the phone.

He added that his sister was forced to bring their mother to hospital to be treated for high blood pressure following the incident.

“I really don’t understand it. These people say they are against gays because of religion, culture and ‘African Values’. Some even said Europeans politicians had paid us to bring shame to Uganda,” he said.

The accusations that Sserwadda and his new husband got married for money do not upset him.

“If we were interested in money, we would have married other people. Neither of us is well off,” he explained.

He denies the accusation that European politicians have acted deliberately in supporting their marriage to bring shame on Uganda, a claim splashed across the Ugandans tabloids, according to Sserwadda.

That Sweden’s European Affairs Minister Birgitta Olsson, an outspoken LGBT rights proponent, attended the ceremony in a church north of Stockholm added fuel to the fire, he said.

“There were gay Ugandans long before white men arrived in Africa,” he said.

Apart from the verbal scorn heaped on his mother, Sserwadda’s adult son was also confronted by fellow students in his university residence hall.

“He has my picture on his wall and one day, as he walked home from a lecture, he was met by a group of students who were holding the picture and had recognized me from the headlines,” Sserwadda recalled.

“They kept asking him if he was gay too. He said he wanted to be kept out of it,” said Sswerwada.

His son felt exceedingly ill at ease due to the tone of the conversation, which he felt verged on threatening. Sserwadda has since enlisted a private councilor to talk his son through the stress.

Despite the inflammatory tone at home, Sserwadda does not regret being open about his marriage.

“Love has no law, no boundaries, and no restrictions,” he told The Local.

“So I don’t regret what I did. One, because I love my husband. Two, because I needed to save him. Three, because this is who I am.”

Sserwada’s husband Lawrence has refiled his application to stay in Sweden with the Migration Board (Migrationsverket).

They hope to have a ruling within the next few weeks. If sent back to Uganda, Lawrence faces anti-gay persecution, they say.

In the mean time, Sserwada is keeping a close eye on an upcoming debate on homosexuality in the Ugandan parliament.

“I love my country, but we must change the laws that make us flee to Europe for protection,” he said.