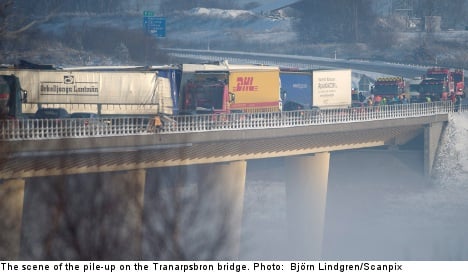 Both vehicles, which were stopped in the left northbound lane, disappeared from the scene before police arrived at the scene of the crash.

“They were what caused the first truck to put on the brakes and start skidding,” Arne Davidsson of the Skåne County police told the Sydsvenskan newspaper.

While the vehicles’ owners aren’t suspected of any crimes, they are being sought by police as part of the ongoing investigation into the cause of the January 15th crash on the Tranarpsbron bridge, which left the E4 motorway closed in both directions near Helsingborg.

In addition, eleven truck drivers involved in the crash are under criminal suspicion for reckless driving as their vehicles were going between 70 and 90 km/hr, a speed deemed much too fast considering the thick fog and icy road conditions.

“That the trucks were driving so fast when 30 would have been the right speed must be seen as reckless driving,” said Davidsson.

Police theorize that the truck that began skidding when braking for the two parked cars could have likely stopped safely had it been travelling at a reduced speed.

The driver of another car involved in the pile-up, considered the biggest traffic accident in Swedish history, is also suspected of reckless driving as a result of information gathered from witnesses, Sydsvenskan reports.

One truck driver is also suspected of involuntary manslaughter as it was his trailer that ended up killing another truck driver from Lithuania who had left his vehicle to warn other drivers of the accident.

Of the 74 vehicles involved in the crash, 40 were trucks and of the twelve truck drivers facing criminal suspicions, five are Swedish.

Police continue efforts to make contact with all the suspected drivers and expect to take the case to prosecutors in a few more weeks.