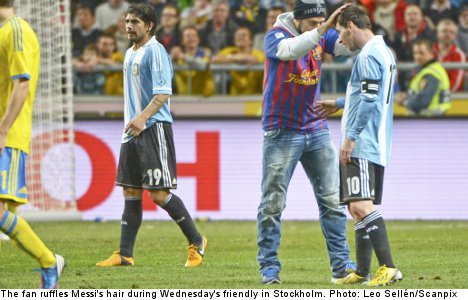 Despite Argentina dominating the Swedes at the Friends Arena on Wednesday night, one Swedish man in the crowd didn’t go home sour.

With Argentina up 3 goals to 1 with only minutes left in the game, an audience member stormed the pitch and headed directly for Messi.

The fan, wearing jeans and a Messi jersey from Barcelona, embraced the footballing phenom and ruffled his hair, before being carted off by the security guards who were in hot pursuit.

While Messi seemed somewhat unfazed by the cuddly attack, the crazed fan was left beaming.

“Getting to meet Messi makes it worth the fine,” the spectator told the Aftonbladet newspaper after the game.

“It was a dream come true. Messi has had success in Barcelona, so this was just my way of showing my love to him. I gave him a kiss on the forehead. He is my idol, the best of all time. Zlatan is not even close to Messi.”

The incident wasn’t the first time the man made headlines by storming the pitch to cuddle with an international footballing star.

During Brazil’s visit to Sweden in 2006, the same man ran onto the field at Stockholm’s Råsunda arena to hug Ronaldinho.

As recently as November last year, the man was fined 2,000 kronor ($315) for storming a match in Sweden’s professional league, wrote Aftonbladet.

The man claims, however, that he is not a criminal and that police officers have just been making “mountains out of molehills”.