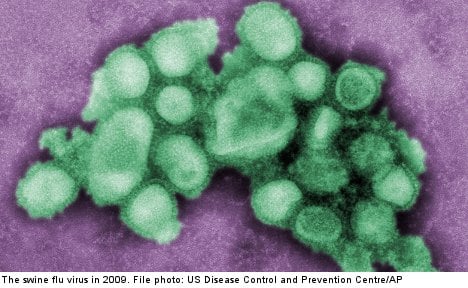 Swine flu has also sent 335 people to hospital, 35 of whom needed intensive care.

Five of the six deaths were people who were already considered to have high health risks and weaker immune systems, but one 35-year-old man who died from the flu in Skaraborg at the end of January was healthy.

Experts say the sickness is now part of the regular cycle of diseases in Sweden and is likely here to stay – even though 66 percent of the population was vaccinated against the disease in 2009.

“Swine flu has become a common type of influenza, it doesn’t hit as hard as we feared it would in the beginning, it’s just like any other cold,” epidemiologist Hélène Englund at the Swedish Institute for Communicable Disease Control (Smittskyddsinstitutet) told the Dagens Nyheter newspaper (DN).

“Now it seems to be a recurring seasonal sickness.”

Englund added that besides swine flu, two other main influenza types are currently spreading in Sweden, Influenza B and A(H3).

As the viruses have quite similar symptoms, it is hard for experts to predict when the current wave of illnesses will recede.

The institute recommends good hygiene – especially washing your hands and coughing into your arm – as the best way to protect yourself and others from being infected.