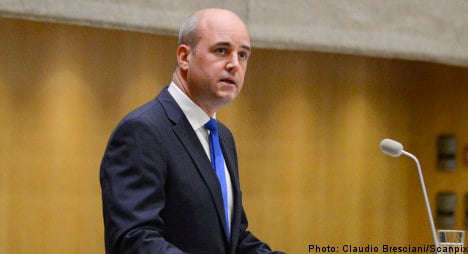 According to Reinfeldt, the fee Sweden pays to be a part of the European Union will drop from the 32.5 billion kronor paid in 2012 to 32 billion kronor.

After a night-long marathon session hashing out details between the 27 member nations and the European Council, Sweden walked away with its discount in tact, albeit slimmed down.

The reduction means that Sweden will retain 80 percent of its current discout, which amounts to 2.8 billion kronor. The rebate reduction is also due in part to the fact that the level EU membership fees has fallen.

Swedish EU Affairs Minister Birgitta Ohlsson of the Liberal Party (Folkpartiet) was satisfied with the cuts to the EU budget.

“We were aiming for €100 billion in cuts, and ended up with about €90 billion. That’s surprisingly good,” she said in a statement.

But Sweden’s Green Party was critical of the compromise to the EU long-term budget.

“From a Swedish perspective, it’s nothing more than a failure that the Swedish rebate seems to have been cut substantially,” Green MP Ulf Holm said in a statement.

The latest figures would represent a 3.0 percent cut from the 2007-13 budget and were less than the €973 billion that was rejected at a budget summit in November that collapsed without any deal.

Originally, the European Commission had wanted a 5.0 percent increase in commitments to €1.04 trillion ($1.4 trillion) – about one percent of the EU’s total gross domestic product.

Despite Friday’s deal, the spectre of a European Parliament veto on a slimmed-down union budget haunts observers in Sweden as it could deprive Sweden of its membership discount.

Cuts demanded by several members, as well as a discount for Denmark whose prime minister daringly included it in her national budget before even landing in Brussels, means that the EU parliamentarians may put their foot down if they decide the budget is too thinned out.

European Parliamentary speaker Martin Schultz has previously warned that too much of a gap between what the Council has said is needed to run the EU and what the member states are prepared to contribute could result in the proposed budget being voted down.

If no agreement is struck, a return to the negotiation table for what is likely to be yet another round of marathon discussions is unavoidable.

Were they to fail, the current EU budget would then remain in place, meaning that Sweden’s hard-fought EU discount would no longer apply, Sveriges Radio (SR) reported.