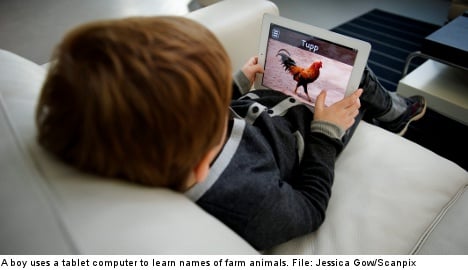 Administrators in Vindeln municipality in Västerbotten County are looking at ways to guarantee that about 95 pupils in the communities of Granö, Tvärålund, Hällnäs and Åmsele are taught by qualified teachers.

One suggestion is to provide students with tablet computers, such as the Apple iPad or other versions of the technology.

The smallest school only has about seven students, municipal chairwoman Eva-May Karlsson told The Local.

“We have teachers with huge amounts of experience but they have to take the new ‘teachers licence’,” said Karlsson, explaining that that process could take some time.

Teacher licences (lärarlegitimation) were introduced by the government as an attempt to shore up teaching quality across Sweden but has caused several administrative challenges, several media report.

In Vindeln, a technology upgrade could help address some staffing problems in the meantime.

“This is a possible way to make teaching even better in some subjects.”

Karlsson said the municipality was currently buying new technology and the idea of using the tablet computers as learning aides – “especially in English or maths” – had been proposed as way to help save the area’s rural schools.

If the idea is put in practice, Karlsson said that tablet computers assisting teachers could serve as a model for other rural communities that wanted to keep their village schools open.

It could also spare very young children from having to travel long distances to school every morning.

“It’s 45 kilometres between our outermost-lying school and the bigger school in Älvbrinken,” Karlsson said.

“But up here in the north, there are other municipalities with much greater distances.”

She emphasized, however, that the tablets would not be replacing teachers in the rural classrooms.

“There would still be teachers present at all times,” said Karlsson.