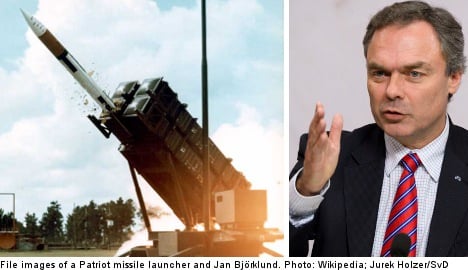 “We’ve reduced our national defence capabilities for the last 20 years. Both the 2004 and 2009 defence resolutions totally focused on international missions,” Jan Björklund, who is also the Liberal Party (Folkpartiet) leader, said in an interview published on Sunday in the Svenska Dagbladet (SvD) newspaper.

His party plans to set up a working group to review Sweden’s defence and propose improvements. And starting in 2015, the party suggests Sweden spends more money on defence.

Currently, Sweden spends around 40 billion kronor ($6.2 billion) or 5 percent of GDP annually on “military defence”, with an additional 3 to 4 billion devoted to “societal readiness”.

While Björklund failed to put a price tag on increased military spending, he said he wanted fewer professional soldiers and more reservists.

Instead of recruiting professionals for six to eight years, soldiers could instead serve on active duty for two years before being placed on reserve for the next decade, he told SvD.

That would allow Sweden to have four to five brigades, around 30,000 soldiers, to protect Swedish territory.

Björklund also said Sweden needed better air defence and suggested that the government consider purchasing the US-made Patriot missile air-defence system and placing it on the Baltic island of Gotland.

Concerns about Russia were high on Björklund’s list of reasons for Sweden to rethink its defence budget.

“I don’t want to say they’re a threat today, but for the first time since the Cold War the Russians are substantially rearming,” he told SvD.

However, Foreign Minister Carl Bildt of the Moderate Party has expressed contrary opinions, arguing that Sweden’s military spending is on par with that of other countries.

He acknowledged that developments in Russia were”worrying”, but Bildt downplayed any actual threat.

“Even if Russia is rearming, it’s not up to the levels of the Soviet Union,” he told Sveriges Television (SVT) on Sunday.

He told Sveriges Radio (SR) that the commander-in-chief’s recent claim that Sweden could only defend itself for a week showed that “more focus” needed to be put on defence.

The Social Democrat chairman of the parliamentary committee on defence, Peter Hultqvist, said the divergent views of the Moderates and their coalition partners indicated “a split” within the government on defence policy.