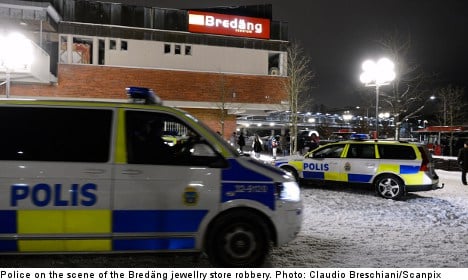 At least three people were involved in the theft of the store in the south Stockholm suburb of Bredäng, which took place around 4.30pm.

After forcing their way into the shop with the help of a backhoe snowplough, the robbers proceeded to ransack the store while the frightened owner and his wife cowered in the back.

“One of them stood guard while two others went in and cleaned out the store,” one witness told the Aftonbladet newspaper.

Before fleeing the scene in a silver-coloured Volvo, the assailants left a bag marked “Bomb” outside the shop in an apparent effort to complicate the police response.

Police cordoned off the area and stopped service on the Stockholm metro system between Sätra and Mälarhöjden as they carried out their hunt for the suspects.

Shortly after 5pm, the robbers’ getaway vehicle was found just a few hundred metres from the Bredäng metro station.

A witness told Aftonbladet the robbers left their loot as well as their weapons in the car.

“There were two bags in the back seat and two boxes filled with gold,” the person said.

Police continued to search the area for clues on Monday night, but refused to comment on what they had found.

There were no reports of injuries in connection with the robbery and trains were once again running normally on the metro by 8pm shortly after police had removed the suspected bomb from the area. 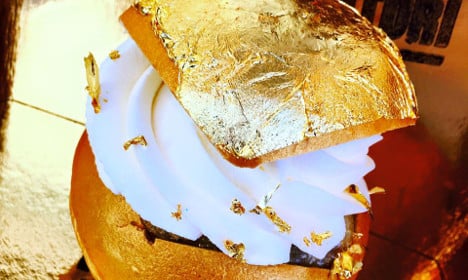 How much dough would you spend on this? Photo: Magnus Johansson Bageri & Konditori