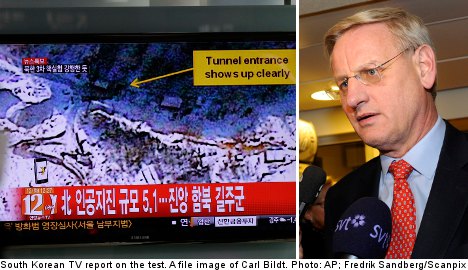 “We must clearly condemn leadership in North Korea for its truly provocative third nuclear test,” Bildt wrote on his official Twitter account.

Bildt added that he expected China to “react strongly” to the nuclear test, which North Korea confirmed following initial reports of seismic activity at the same location of previous nuclear tests carried out by the regime in Pyongyang.

The official KCNS news agency reported that North Korea had used a miniaturized and lighter nuclear device with greater explosive force than previously.

In addition to issuing a condemnation, Bildt added that he was cancelling a planned courtesy visit scheduled for Tuesday with North Korea’s ambassador to Sweden

“Instead he will probably be called in at a lower level in order to receive a protest,” Bildt told the TT news agency.